Whilst my family and I were in the capital of Malta, Valletta, we visited the cathedral and took a headset tour around the whole space.

St John’s Co-Cathedral was built between 1573 and 1577 and contains two masterpieces by Caravaggio. The cathedral was beautiful and is a gem of Baroque art and architecture.

This church today still remains an important shrine and a sacred place of worship. The construction was commissioned in 1572 by Grand Master Jean de la Cassière to serve as the conventual church of the Knights of Malta and designed by the Maltese military architect Gerolamo Cassar. The church was dedicated to St John the Baptist, the patron saint of the Order.

If you love culture, art, religion and history, this would be such a special place to visit. As soon as you walk into the Cathedral it is breathtaking! The artistry and grandeur of the place is so inspiring with the beautiful sparkling gold leaf, marble and painted scenes. 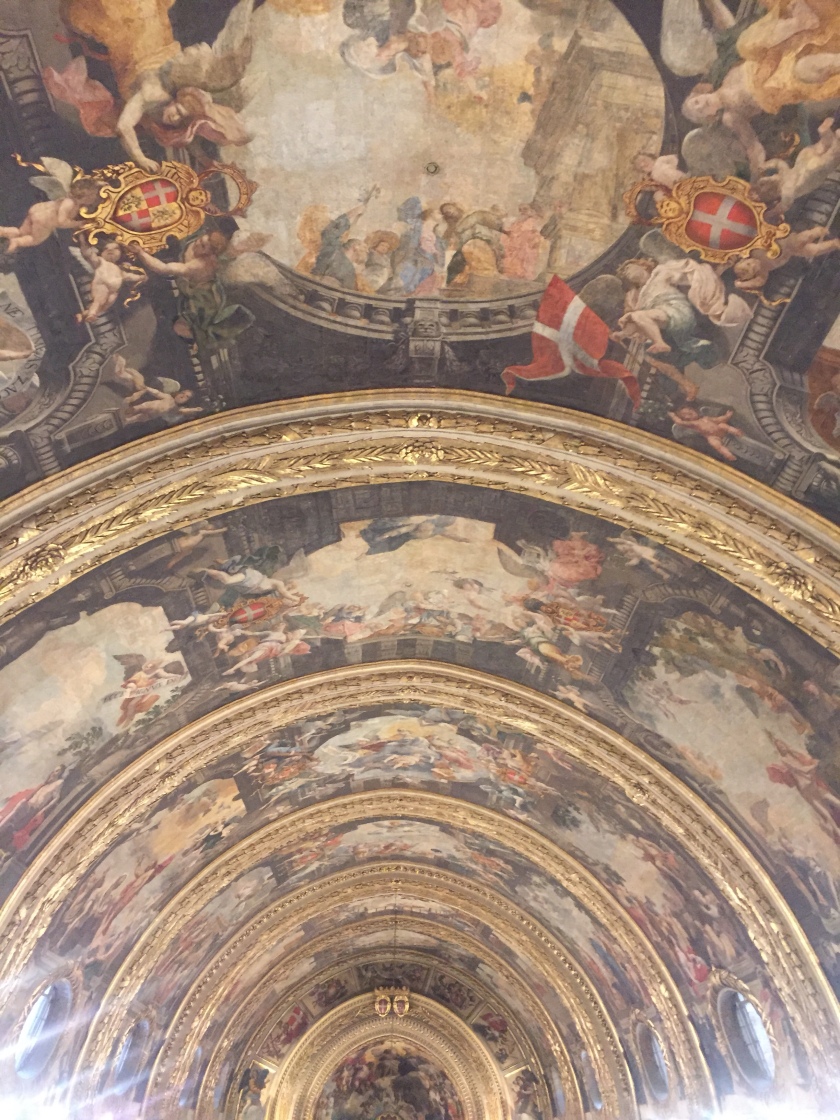 I would describe the interior as ornate with very elaborate ceiling patterns and golden tones throughout the architecture. The dawn of the seventeenth century ushered in the new Baroque style, as a consequence of the Catholic Reformation when the churches were embellished with the new artistic language. I really do think that the design reflects the era’s flamboyant and demonstrative character with the use of ample material.

Grand Masters and Knights were said to have donated gifts of high artistic value and made enormous contributions to enrich it with only the best works of art by leading artists available to them. The Calabrian artist Mattia Preti, who was commissioned to decorate the vault, transformed the interior into a celebration of Baroque art.

I was definitely surprised when I walked in. There is a stark contrast between the minimal, stone and somewhat strict architecture of the façade and the richness of the interior; it is unique to say the least!

Myself and my mum were fascinated by the pillars that surrounded some of the painting in the wings of the cathedral. One was marble with hints of gold running through them and others had a more intricate gold leaf design at the bottom with a spiral gold design running up to the top. Both were magnificent and certainly showed off and framed the pictures perfectly; they are definitely a show piece. Both paintings were also positioned behind a row of elaborate gold candle sticks that covered at least a quarter of the painting; in some cases half. 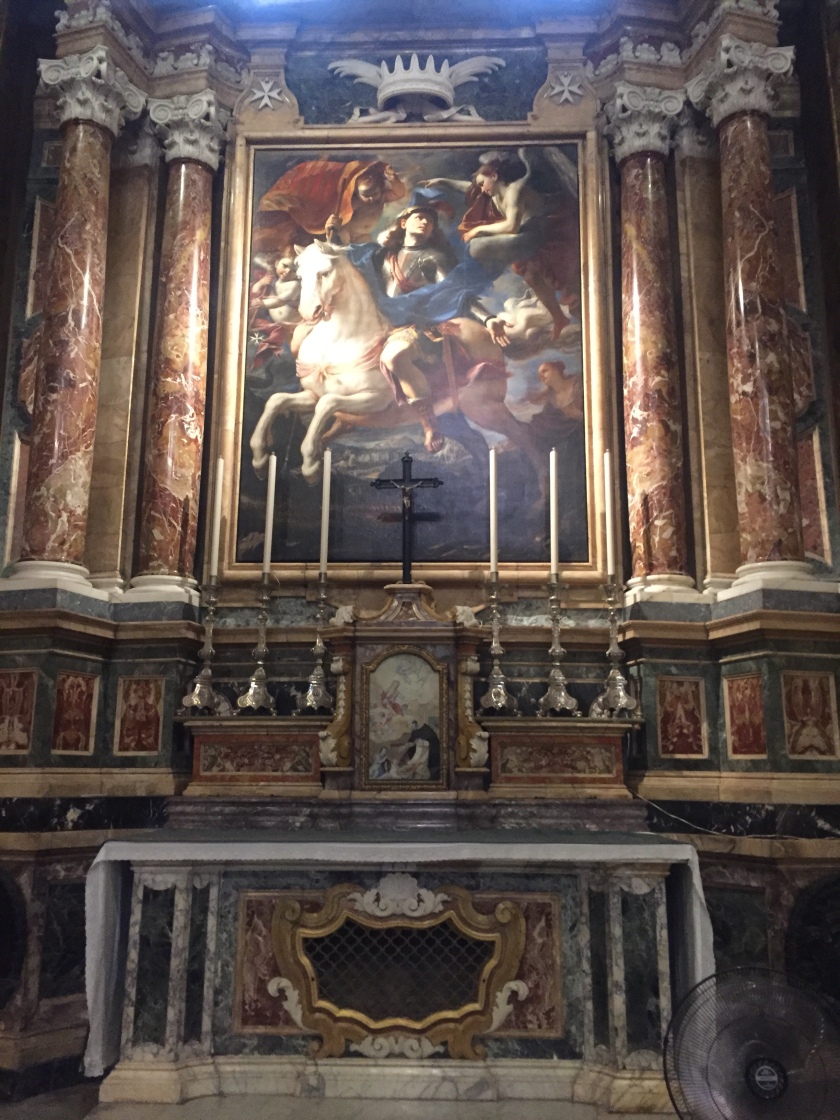 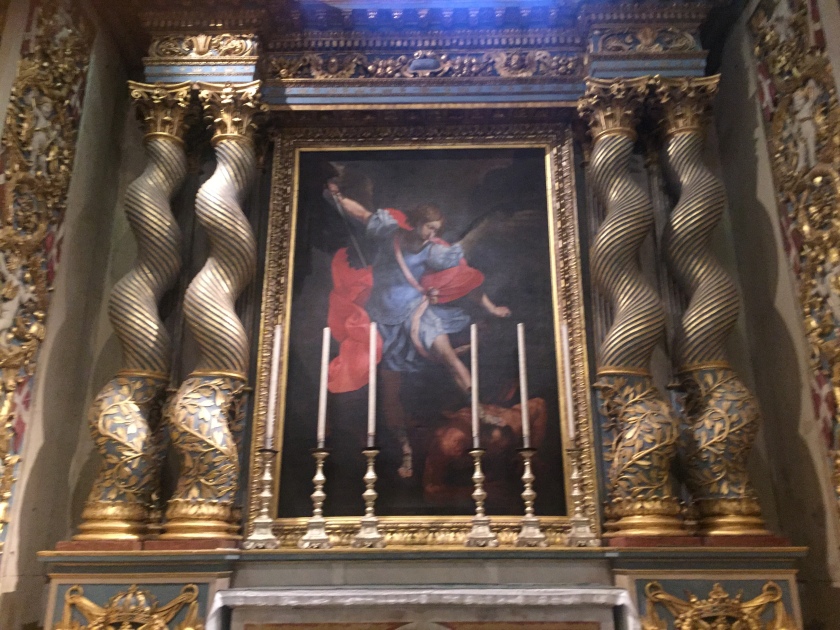 The element of the whole space that I enjoyed viewing the most was the oratory that holds the biggest and only signed masterpiece by Caravaggio.

Michelangelo Merisi da Caravaggio (1571 – 1610), ranks amongst the most influential painters in the history of art. His paintings combined a new form of realistic observation of the human state, both physical and emotional with a theatrical use of light infusing. I really feel that it is this aspect that gives his works a dramatic character.

I knew that he was a rebellious artist, however I didn’t realise that in May 1606 whilst working successfully in Rome, one of his many brawls resulted in Caravaggio killing a man named Ranuccio Tomassoni during a duel. The pope hastily issued a bando capitale against him. Caravaggio fled to Naples and then left for Malta, the headquarters of the Knights of the Order of St John of Jerusalem on 12 July 1607. After a year on the island, Grand Master Alof de Wignacourt, accepted Caravaggio in the folds of the Order as a Knight of Obedience.The Grand Master had obtained a unique papal permission to accept the artist within the Order. Therefore, whilst in Malta, Caravaggio painted ‘The Beheading of St John the Baptist’ and ‘St Jerome Writing,’ both of which are preserved in St John’s Co-Cathedral.

‘Beheading of St. John the Baptist’ is the work that was once described as, ‘the painting of the 17th century’. Death and human cruelty are laid bare by this masterpiece, as its scale and shadow daunt and possess the mind.

‘St Jerome Writing’ composition and subject-matter really do strongly reinforce each other: the aging saint feverishly concentrating on what he has written, absent-mindedly stretches out a sinewy arm to the ink well on the far side of the table. In doing so he indicates the skull, a reminder of death which observes him, mirroring his very struggle to overcome it.

The church is amazing and the view over the entire space on the balcony was stunning. However, I found it quite difficult to describe because the decoration was so overwhelming. Seeing the Caravaggio painting of John the Baptist was my highlight; it was truly amazing in scale, surrounded again by the exaggerated golden designs.