I recently discovered Tank on my FCP Treasure Hunt in my first week on Fashion Communication and Promotion. I found the magazine in the magazine and book independent store, ‘Ideas on Paper’. Tank is an independent UK-based magazine which launched in 1998. It is a quarterly publication that covers contemporary culture, fashion, art, architecture, technology and politics. When researching the magazine further, I found that it is considered one of the pioneering publications in boutique magazine publishing, balancing fewer advertisements with a high cover price. 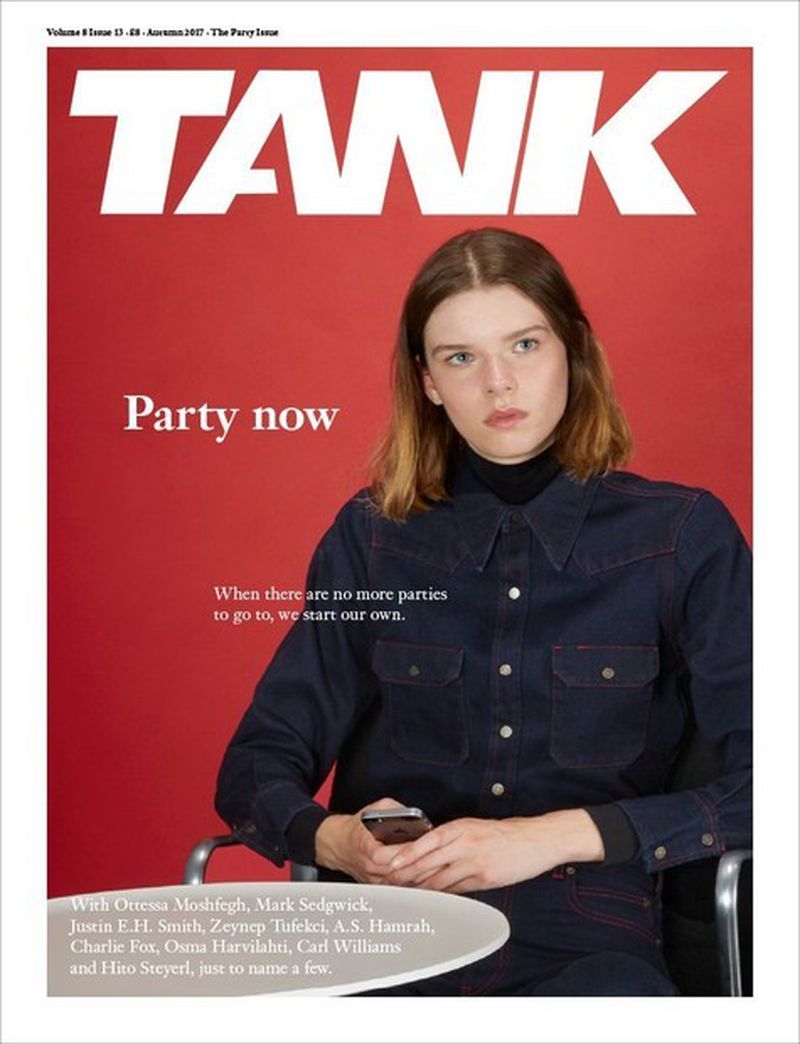 I was drawn to Tank out of the whole store because I was attracted by the paper quality; the cover has an almost textured feel. Having a quick flick through the prints, the layout is simple but effective and the large photographs in side really caught my eye; the styling of each is effortless.

When in the store I picked up a Summer 2017 edition, as well as the more recent Autumn 2017 issue. Even just simply looking at the covers of both of the prints, it is clear which season that the issue is focusing on. The summer one contains a cool-toned yellow dress with a hint of a warmer-toned orange-yellow in the background. The autumn edition sees a girl in a chair placed in front of a deep-red background. This reflects the traditional autumnal colour scheme of reds, browns and deeper-toned colour pallets compared to that of summer’s bright-hues.

The summer print is ‘The Book Edition’ and is presented online as ‘Literature never gets old, which is why this summer marks our third annual books issue – a compendium of the most important publications of the season.’ Whereas, the Autumn issue was promoted on the Tank website with the following statement: This autumn, at a time when the world feels at its most divided – its most partisan – we’re throwing our very own Party Issue. While party politics in America are transformed into a school-canteen food fight, here in the UK there has been resurgence in political party membership.’

After having read both magazines, there was a couple of sections that I wanted to discuss and share with you. In the Summer Edition, the article titled Uniform Attitude stood out to me. It is ‘Inside the world of Louise Trotter’s Joseph.’ The words are by Tamsin Blanchard, the photography by Mauritania Sillen and the styling is by Nobuko Tannawa. Trotter likes flat shoes and therefore each of the photographs show an everyday ‘uniform’-appropriate show. I agree, if I need to get somewhere, I want to get there fast so I definitely love a comfortable, practical shoe, especially for work. All of the images feature a non-cluttered appearance which I enjoy. The images are shot against a white background and so do not detract from the clothing in the images.

The photographs may have been inspired by books that Trotter enjoys. Sean Scrully and The Teds, by Chris Steele-Perkins and Richard Smith have a recurring theme: uniform. These books contain every page filled with boys and men looking out, oblivious of the photographers gaze, dressed in Edwardian Jackets, starched shirts and social history spanning the 1950s to the 1970s. When Trotter started working at Joseph in 2009, there was already a strong signature: ‘Joseph created a uniform for women.’ This uniform has continued to develop and build.

The images have a timeless quality and in my opinion, uniforms are something we need every day, the perfect trousers, perfect jeans, shirt and overcoat. Trotter was intrigued by the way that you can still communicate who you are through this ‘uniform’. The photographs show luxury essentials with fitted trousers and timeless fabrications. There is also a lot of movement in the photographs; Trotter states, ‘There’s nothing worse than seeing a woman who’s uncomfortable, or who feels like she’s dressing for someone else.’ They really stood out to me because they have an expressive-feel underneath the traditional discipline of the uniform. The first image seen in this section of the magazine is an authentically British and functional tweed-patterned overcoat, whereas once I turned the page, I was presented with a decorative, loud yellow spread; one of the pieces being a love-it to hate it floral dress. The coat definitely shouts autumn to me as a result of the neutral colours, whereas the bold yellow outfits represent the heat of summer and happiness and youth.

I loved this section of the magazine as I feel that Trotter and the creative director have got a balance between masculine and feminine, the functional and the decorative. This shows me that ‘uniform’ can be whatever an individual wants it to be, the main priority is comfort!

In this section, the model wears clothing from pre-fall 2017 and therefore I wanted to make a comparison from a couple of sections that stood out to me from the more recent edition of the magazine: Autumn 2017.

The ‘Soft Furnishing: a relaxed silhouette with luxurious and texture neutral,’ section of the Autumn edition has a lot of similarities to that of the first image of the section I was describing above in the previous print of the magazine. The photography is by Marc Hibbert and the styling is by Bobby Hook. The colour scheme captured reflects that of Pantone’s colour report for London Fashion Week’s autumn collections 2017. Vivid Flame Scarlet led the color palette for Autumn/Winter 2017/2018 and is featured in the first photograph in this section: a bold red stripe on a knitted neutral-toned cardigan. Toast, Cooper Tan and Otter all appear in the photographs and create a very subtle colour-scheme, reflecting the shades for autumn and the transition to the cooler-winter colours.

In one of the photographs, the trousers by Moncler Grenoble have the same tweed-pattern as the over-coats in the summer edition. This may therefore mean that this material is a classic seasonless piece, as well as being a good transition pattern between the two seasons. In this section of this edition, the models are men; however Trotter would have possibly styled women in these outfits, the stripy shirt and trousers combo which can be seen in one of her yellow-looks. The neutral colour hues also appear frequently throughout the section on Joseph in the summer magazine. This continuity therefore may being demonstrating that although summer and autumn have their traditional colours associated with them, naturals are timeless and classic and appear throughout any brand at any time of the year.

Furthermore, in the autumn issue, the ‘Rough and tumble: ready, steady, go’ sections caught my eye for having similarities to that of the section I spoke about in the summer print. The photographs in this element of the magazine are by Gabby Laurent and the styling is by Rose Forde. These images are all captured at interesting angles, and like Louise Trotter’s Joseph, the photographs are taken against a simple white background. Although autumnal red, dark navy, browns and burnt orange appear throughout the photoshoot featured, the same yellow is used that not only matches the dress on the front of the summer issue, but also the Joseph use of the colour that I mentioned earlier.

When I was reading through the magazine and stopped at the ‘Rough and tumble’ section, I instantly saw the continuity of the straight-leg trouser and matching shirt that was featured in the Jospeh shoot. The shot by Laurent in the autumn issue also reminded me of the uniform theme in the summer section. The tumble shot where the outfit is featured, demonstrates Trotter’s idea that a ‘uniform’ should be comfortable and flexible and be able to adapt to all situations thrown at us.

I really enjoyed reading through both of the Tank magazine. I have never read two back-to-back editions of a magazine before with a view to comparing them so I was interested by some of the similarities that I discovered. It has shown me that certain fashion pieces flow from season to season and keep popping up, no matter who the photographer, stylist nor brand is.